Find Chris at Amazon or Amazon UK. (For other countries click here.)
Chris at B&N/Nook, Kobo, and iBooks.
Sign up for Chris’s newsletter

Before Melanie Smooter became hot fashion designer Melanie Carmichael, she was known as Felony Melanie, the teenage troublemaker of Pigeon Creek, Alabama. Aching to escape the boredom of small-town life, she gets into many reckless adventures. Her boyfriend, Jake, is always by her side – and the local sheriff is usually close behind.

Readers ages 12 and up will enjoy reconnecting with their favorite characters from the Sweet Home Alabama movie. Head back in time to the early 1990s for this laugh out loud rom com based on one of the best rom coms of all time.

The Well of Sacrifice
In ninth-century Guatemala, a Mayan girl faces down a power-mad High Priest who sacrifices anyone standing in his way.

Kirkus Reviews called this middle grade adventure, “[An] engrossing first novel….Eboch crafts an exciting narrative with a richly textured depiction of ancient Mayan society….The novel shines not only for a faithful recreation of an unfamiliar, ancient world, but also for the introduction of a brave, likable and determined heroine.”

The Eyes of Pharaoh 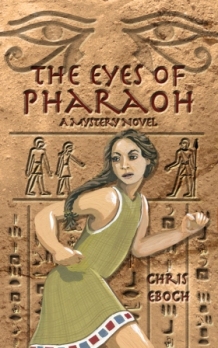 1177 BC: During the reign of Pharaoh Ramses the Third, three friends stumble into a mystery. When Reya hints that Egypt is in danger from foreign nomads, Seshta and Horus don’t take him seriously. How could anyone challenge Egypt?

Then Reya disappears. Seshta and Horus set out to find him—and discover a darker plot than they ever imagined. To save their friend, Seshta and Horus spy on merchants, soldiers, and royalty, and start to suspect even The Eyes of Pharaoh, the powerful head of the secret police. Will Seshta and Horus escape the traps set for them, rescue Reya, and stop the plot against Egypt in time?

The Genie’s Gift
The Genie’s Gift is a lighthearted action novel set in the fifteenth-century Middle East, drawing on the mythology of the Arabian Nights.

Thirteen-year-old Anise, shy and timid, dreads marrying the man her father chooses for her. Her aunt tells her about the Genie Shakayak, the giver of the Gift of Sweet Speech. He lives high atop Mount Quaf, many weeks’ journey across a barren desert. The way is barred by a dozen dangers and trials. But those few who cross the desert and defeat the guardians of the mountain receive their reward. From that day forward, their words drip like honey from their lips, charming all who hear them, and no one can deny them anything they ask.

Anise is determined to find the genie and ask for the gift. But the way is barred by a series of challenges, both ordinary and magical. How will Anise get past a vicious she-ghoul, a sorceress who turns people to stone, and mysterious sea monsters, when she can’t even speak in front of strangers? Will she ever reach the top of Mount Quaf—and if she does, can she convince the Genie to give her the gift?

While hiking in the mountains, Jesse meets a strange trio. He befriends Maria, but he’s suspicious of the men with her. Still, charmed by Maria, Jesse promises not to tell anyone that he met them. But his new friends have deadly secrets, and Jesse uncovers them. It will take all his wilderness skills, and all his courage, to survive.

Readers who enjoyed Gary Paulsen’s Hatchet will love Bandits Peak. This heart-pounding adventure tale is full of danger and excitement.

The Ghost on the Stairs
While filming at an old hotel in Colorado, Jon and Tania find themselves trapped in a ghostly love story that happened more than a century ago. Local legend has it that a ghost bride still wanders the hotel, waiting for her lost husband. Can this fearless brother-sister duo reunite a newlywed couple — and put these ghosts to rest at last?

Jon and Tania are traveling with the ghost hunter TV show again, this time to the Superstition Mountains of Arizona, where the ghost of an old miner is still looking for his lost mine. The siblings want to help him move on—but to help him resolve the problem keeping him here, they’ll have to find the mine. And even then, the old ghost may be having too much fun to leave! It’s a good thing Tania can see and talk to him, because the kids will need his help to survive the rigors of a mule train through the desert, a flash flood, and a suspicious treasure hunter who wants the gold mine for himself.

Jesse Owens: Young Record Breaker
Through hard work and courage, African-American runner Jesse Owens overcame racism, poverty and poor health. He won four gold medals in the 1936 Olympics, held in Germany under Hitler, proving that Black athletes could compete at the highest level. This inspiring story is focused on Jesse’s childhood, up through the Olympics.

Milton Hershey: Young Chocolatier
is a biography of chocolate king Milton . After a tumultuous childhood, Milton Hershey started work at an ice cream parlor at age 14. At 18, he opened his own confectionery shop – and lost it six years later. After a string of failures, he finally found success and went on to start a school for underprivileged children that remains to this day.

You Can Write for Children
Remember the magic of bedtime stories? When you write for children, you have the most appreciative audience in the world. But to reach that audience, you need to write fresh, dynamic stories, whether you’re writing rhymed picture books, middle grade mysteries, edgy teen novels, nonfiction, or something else.

In this book, you will learn:

Whether you’re just starting out or have some experience, this book will make you a better writer – and encourage you to have fun!

Advanced Plotting
Advanced Plotting is designed for the intermediate and advanced writer: you’ve finished a few manuscripts, read books and articles on writing, taken some classes, attended conferences. But you still struggle with plot, or suspect that your plotting needs work.

This book can help.

The Plot Outline Exercise is designed to help a writer work with a completed manuscript to identify and fix plot weaknesses. It can also be used to help flesh out an outline. Additional articles address specific plot challenges, such as getting off to a fast start, propping up a sagging middle, building to a climax, and improving your pacing. Guest authors share advice from their own years of experience.

Read the book straight through, study the index to find help with your current problem, or dip in and out randomly — however you use this book, you’ll find fascinating insights and detailed tips to help you build a stronger plot and become a better writer.

Chris at Amazon or Amazon UK. (For other countries click here.)
Chris at B&N/Nook, Kobo, and iBooks.
Sign up for Chris’s newsletter.